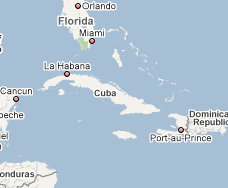 HAVANA, Cuba – Today, officials sat down for the first time together to discuss restoring direct mail service between U.S. and Cuba. This is a small but positive move toward improved relations that comes after a bitter week of accusations over the extension of the U.S. trade embargo with Cuba.

The U.S. delegation is headed by Bisa Williams, who is the current deputy assistant secretary of state for Western Hemisphere affairs. The negotiations are being held at the Cuban capital of Havana. Representatives of the U.S. Postal Service were also present.

Since there is no U.S. embassy in Cuba, Washington maintains a U.S. Interests Section in Havana, a spokeswoman for which is Gloria Berbena. Berbena told The Associated Press that this is the first time State Department officials have traveled to Cuba for talks since late 2002.

The talks seem to be pretty hush hush. The Cuban government has no comment on the talks, not even to confirm they are happening … nor will either side disclose exactly where in Havana the talks are being held.

In August 1963, direct mail service between the U.S. and Cuba was suspended. Washington imposed its embargo a year later. Because of the ban on direct mail, a letter currently mailed between the two nations can only arrive by first going through a third country like Mexico or Canada … with a little bit of luck … maybe. Still, it can sometimes take months for letters to arrive.

The U.S. first attempted to restore direct service in 1999, then tried again in 2000, 2002 and 2008. Cuba finally accepted in May, of this year and agreed to host the talks when representatives from U.S. and Cuba met in New York in July when the bilateral talks on migration were held.

According to the Associated Press, Berbena stated that the talks would be limited only to direct mail service and that the talks were expected to take all day.  Berbena said that the Obama administration sees the talks “as a potential avenue to improve communication between our countries’ peoples.” The outlook does appear to be optimistic for families who are separated by this political divide and for users of mailing lists in general.